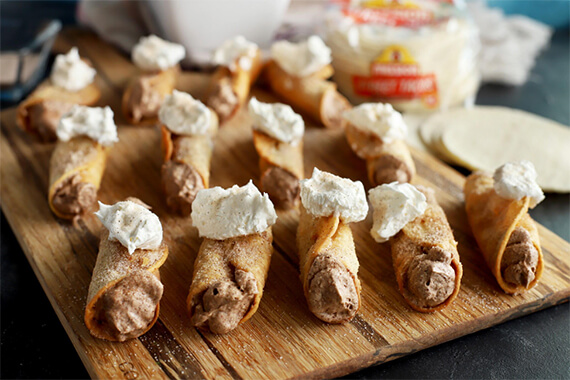 Our Churro Cheesecake Taquitos recipe is carefully crafted to make your next meal time extraordinary. Get the step by step instructions to make this delicious dish.

Heat about 1 1/2 to 2 inches of canola oil in a large saucepan over medium-high heat until it reaches 350℉.

When ready to fry, warm the tortillas in the microwave for about 10 to 15 seconds, until soft and pliable. Roll each tortilla up and secure in place with a toothpick.

Fry the tortillas in batches in the hot oil, about 3 to 4 at a time, frying until golden brown and crisp. This will take about 3 to 5 minutes per batch. Repeat with remaining tortillas.

Remove fried tortilla shells to a plate lined with paper towels. Sprinkle cinnamon sugar over the freshly fried tortillas. Set aside to cool at room temperature.

In a medium bowl, whisk together cinnamon, powdered sugar, vanilla extract, and heavy whipping cream until well-combined. Set aside.

Place cream cheese in the bowl of a stand mixer fitted with the paddle attachment. Beat cream cheese until light and fluffy, about 3 to 5 minutes.

Pour in cinnamon cream mixture into the cream cheese and beat until just combined.

Add cream cheese mixture to a pastry bag and pipe into cinnamon sugar-coated fried tortillas, filling from both sides until the filling comes to the edges.

Garnish with a dollop of whipped cream on each taquito and sprinkle with remaining cinnamon sugar.

If you have extra filling leftover, serve it up alongside some Mission Thin & Crispy Tortilla Chips as a dessert dip!